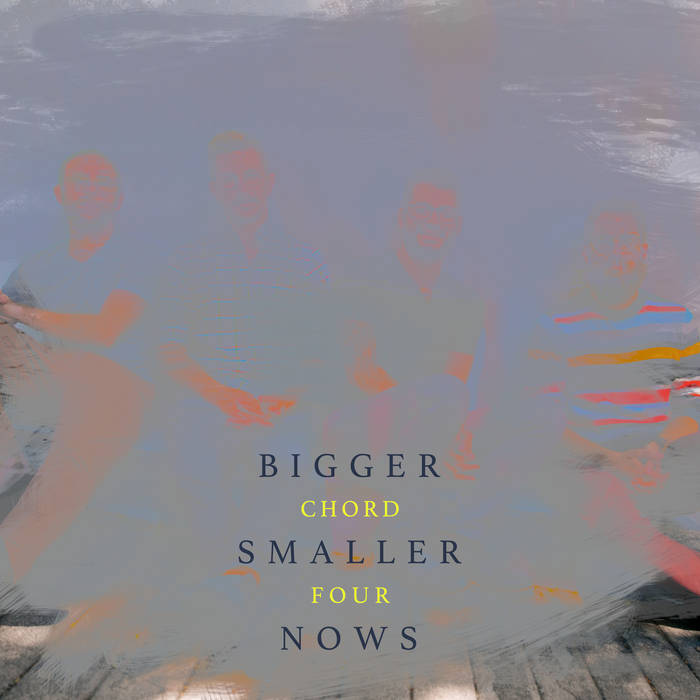 Steven Blum Makes me want to slap some trucks. These guys hit a lot of notes with this one. Lighthearted and profoundly deep, subtle and powerful. Favorite track: Broken Windmills.

FROM THE LINER NOTES:

On some days all we can do is get to tomorrow, and our nourishment to make that journey is optimism, however faint. The present extends in all directions around us, the intersection of many overlapping timescales, and we gain something enduring from these bigger and smaller nows--the certainty of change. This record is a reflection of our shared joys, difficulties, successes, losses, and hope for a better future.

In solidarity with marginalized Black communities, without whom our music is unimaginable, 20% of the profits of the online sales of this recording will be donated to the California Pan-Ethnic Health Network, cpehn.org.

Thank you to Steve for visiting, Max and Sophocles for their ears; to Kyle and family at Magruder Ranch for their support of creative artists, unparalleled hospitality, and incredible sustainable ranching practices; to Brandon Schmidt for his musicking; and to our families for the constant and unwavering support, inspiration, motivation, and love.

When Colin Woodford, the drummer for the avant-jazz quartet Chord Four, composed the song “The Wonderful Year,” he had titled his pseudo-optimistic tune about a hypothetical year to come, without knowing what was in store for 2020. Now, as we enter the last months of what has been a difficult and tragic year for so many, Woodford’s sentiment is needed more than ever. In his words, the piece was always “meant as a balm for difficult times and encouragement to keep walking anyways.” Moving forward is a theme of Bigger and Smaller Nows, the new album by Chord Four, whose members are dedicating this music to those who have endured similar struggles—as individuals and as part of a greater society.

Chord Four is a Los Angeles based group co-led by saxophonist and clarinetist Andrew Conrad, trumpeter Brandon Sherman, bassist Emilio Terranova and drummer Woodford. They have been a working band since 2008, when they were recent alumni from the progressive jazz program at California Institute of the Arts. All four musicians are equally comfortable inside and outside of traditional jazz harmony, and their music often blurs the divide seamlessly. Their innovative, interactive approach to improvising has been recognized by LA Weekly as “A true sonic page-turner, hopefully with more chapters to come,” and their compositions lauded by DownBeat Magazine as having “coalesced a global array of rhythms and out-of-the-box structures to facilitate fresh thinking on the improvisations.” They have received local as well as international accolades, taking first prize in Italy’s Conad Jazz Contest, earning them a coveted performance slot at the 2017 Umbria Jazz Festival.

In their previous works, Chord Four’s music has been described as “tongues at least partly in-cheek,” which is reflective of the four friends’ lighthearted demeanor. Though recorded in 2019, the events of the past year coupled with inevitable life progression have infused their music with moments of ponder on Bigger Smaller Nows. The title, according to Terranova, stems from the understanding that pivotal life events are not necessarily discerned to be so as they are happening; what happens “in the now” could turn out to be something bigger or smaller. That absence of foresight can be disconcerting for many, but it’s something jazz musicians seem to be better equipped to handle; they spend more time than most “living in the moment,” when their improvisations are at their most successful.

In addition to “The Wonderful Year,” Woodford contributes several more compositions, including “prelude (beetles and dahlias)” a title derived from Colombian author Gabriel García Márquez's work, “100 Years of Solitude.” The music is a tranquil exploration of the continual cycle of life represented through the earth’s soil. It is followed by the Woodford piece, “eii30 v2,” a kind of companion piece to the former in mood and aesthetics.

Terranova’s, “Mendocino Complex,” recounts the bassist’s visit to the pastoral Potter Valley in Northern California, and its subsequent ravaging by a series of massive wildfires over the next few years. Terranova recounted in his construction of the piece, “I attempted to go through the emotions that I experienced while spending time [there] and seeing the images of destruction afterwards.” Terranova sees the tragedy as a microcosm of the impact of climate change. “In a way it's a metaphor,” he continued, “for how humans have interacted with their surroundings and have potentially permanently damaged our only home.” The mournful blues-reverie of “Goodbye” is, in Woodford’s words, “about the moments when an absence becomes a presence. When someone or something not being there becomes tangible.” For Woodford, what became tangible was the loss of his father.

The gravitas on much of Bigger Smaller Nows is ultimately balanced out by Chord Four’s more trademark themes of whimsy and levity, yet even then those moments have a maturity to them, like the inside jokes erstwhile college buddies will sometimes retell in wistful reminiscence. “Slappin’ Trucks” is an aural approximation of Sherman’s son at determined play with his toys, slapping his cars and trucks together to make them go faster down the hallway. As the trumpeter recollected, “it would always unfold in a much more disciplined and consistent manner of kinetic energy.” The piece was written to capture that specific type of energy. “Fuschurama” is a play on “Futurama,” the wacky cartoon show, a tune which saxophonist Conrad wrote while watching episodes of it on television.

Sherman’s “Not Not Nor Knot” is a simple motivic catchphrase made complex by its multi-metered application as the piece unfolds, resulting in perhaps the grandest narrative offered on this album. “Broken Windmills” is a completely improvised piece, in which all four members of the band agreed it sounded like that at the outset. The spontaneous organization of sounds leading to revelations of drama and humor reveal the band’s true and evolving nature.

It should be noted that the release of Bigger Smaller Nows was delayed by many months due to the Covid-19 pandemic. In the interim, the killings of African American citizens by police and the ensuing demonstrations profoundly affected the members of Chord Four. From their liner notes: "In solidarity with marginalized Black communities, without whom our music is unimaginable, 20% of the profits of the online sales of this recording will be donated to the California Pan-Ethnic Health Network, cpeh.org."

Also found in their liner notes is the band’s intent for their album: “This record reflects our shared challenges, dreams, losses, triumphs, and unity in hope for the future.” They, as do we all, hope for better days ahead, perhaps next year.

Chord Four is an award-winning California Avant-Garde ensemble of improvisers and composers. Winners of the first international CONAD Jazz Contest, this chord-less ensemble has a new record coming out in 2019

Bandcamp Daily  your guide to the world of Bandcamp

MF DOOM is given his flowers, plus appearances from MC Jada Imani and Stanley Ipkuss